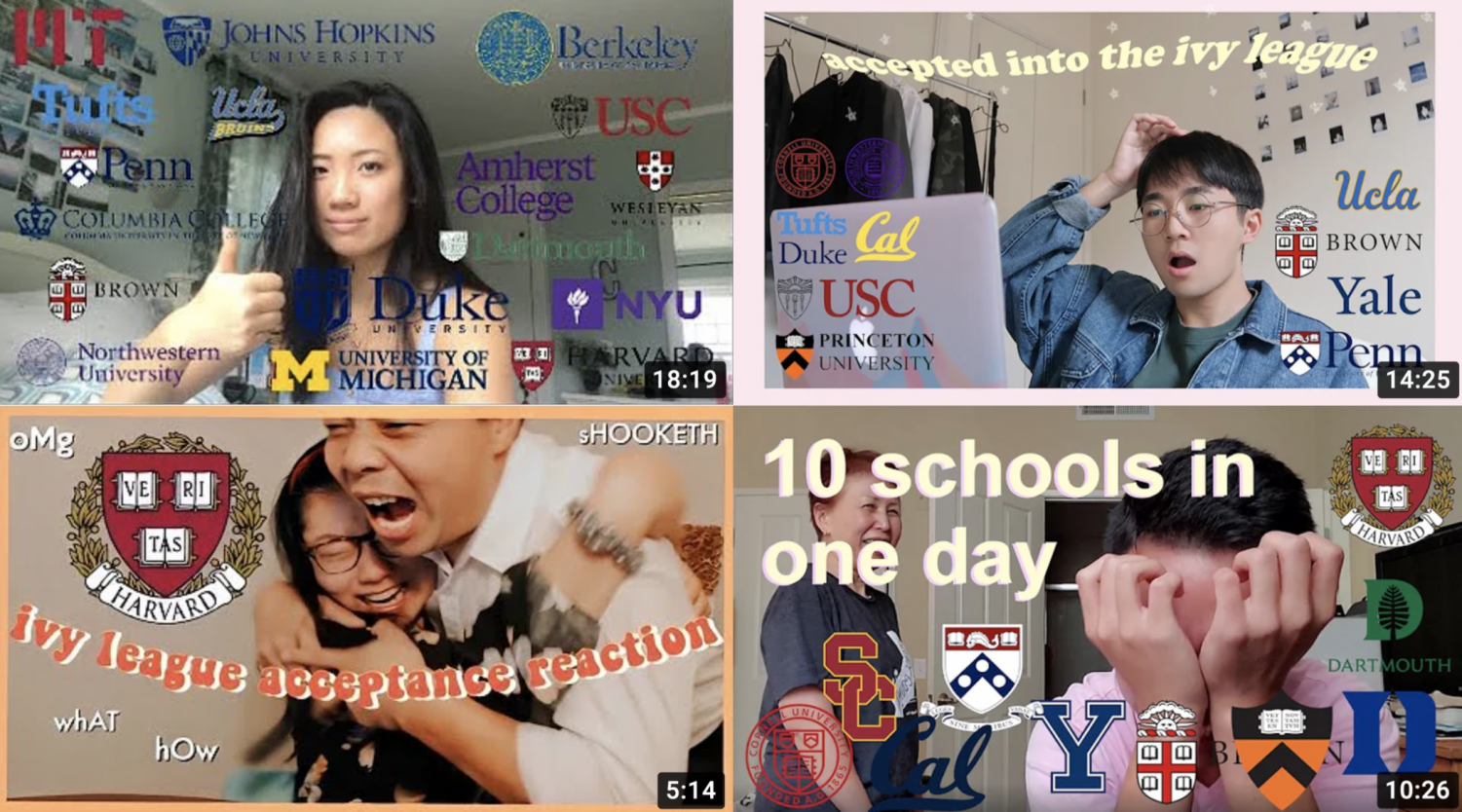 College decision reaction videos have gone viral all over the internet, often garnering millions of views.

The documentation of acceptances, rejections, and imposter syndrome

A strained pause, a moment of disbelief, an “oh my god”, and it becomes clear. She’s been accepted.

During her college application season in high school, Nina Wang had applied to twenty schools, ranging from the University of Massachusetts Amherst to Harvard University. Since freshman year, she had been training diligently: investing hours into extracurriculars, working tirelessly to get ahead in academics, jumping hurdles to stand out, and now it was time to face the college admissions officers.

In her YouTube reaction video, accumulating 2.5 million views, Nina comments that she wasn’t excited about going to many of the schools she applied to, but instead felt like she needed a sense of security.

Like many of her viewers, she tells them that she watched ends on ends of college acceptance and reaction videos, and felt like she needed to make one of her own.

Many would find that posting a revealing and raw video of college acceptance reactions for millions of strangers to see it courageous, but behind all the screaming, hugging, and held back tears, exists a universal feeling of fear.

Anastasiya Pshyk, a recent graduate of Wilton High School in Wilton, Connecticut, who has watched countless college reactions, shares her thoughts on them.

“I have watched countless college reactions and every single one has made me feel like I am either not doing enough or spending my time on things that do not exactly matter,” Pshyk said.

She mentions how high school should be about having fun, spending time on activities that bring joy, and setting yourself up to be the person you will develop into.

“High school should not be about creating the perfect resume for college but rather focusing on the things that truly make you happy,” Pshyk said.

Emily Zhao, a sophomore at Moundsview High School in Arden Hills, Minnesota echoes similar sentiments. She also feels, however, that comparison takes a big role when it comes to the college admission process.

“I’ve grown up comparing myself and being compared to the people around me, since I’m surrounded by excellent people,” Zhao said.

Elisa Guo, a junior at Moundsview High School in Arden Hills, Minnesota feels excitement for those admitted into their dream schools, and often looks to their YouTube content for insight.

“I also watch those ‘What stats got me into college?’ videos, and I definitely find myself comparing me to the people in the video,” Guo said.

Guo also offers some advice on how to overcome those feelings of anxiety and negativity, emphasizing that every person’s hobbies, skills, and interests are unique, and that it’s those qualities that set you apart in applications.

“Those sorts of videos are definitely informational and helpful, but at the same time, they can negatively impact mental health. I just try to stay focused on myself and do what I enjoy, instead of following what others do,” Guo said.

I have this weird need to please everyone. I’m scared to death of getting a real job.”

Like many other teens across the country, viral sensation Nina Wang experienced a lot of stress and anxiety during high school, which manifested into a build-up of imposter syndrome as many would describe as increasing doubt in self ability and the feeling like that of a fraud in areas like academics or athletics, even when reality does not reflect internal beliefs.

Ironically, imposter syndrome deprives mostly high achieving students of confidence, leaving them questioning the caliber of their accomplishments and abilities in regard to their peers, as well as convince them that their success stems from luck.

Cleveland Clinic categorizes imposter syndrome in four areas of life: at work, home, school, and in relationships. A 2019 study shows that imposter syndrome is linked to job dissatisfaction and a drop in job performance, and another study from the same year found that it’s been associated with mental health illnesses, such as anxiety or depression.

Now a sophomore at the Massachusetts Institute of Technology, Wang addresses her imposter syndrome, as well as subconsciously degrading herself, in her Youtube video, “A Work Day in my Life: Digital Marketing Edition.”

Many students do not see the danger of comparing personal achievements with those of others, especially when it’s with strangers. Quon Howery, a college YouTuber and freshman at Princeton University, articulates an often unfamiliar narrative.

“People can downplay their accomplishments to just be humble, claiming they didn’t really do that much when they really did. Then there’s the opposite end of the spectrum: people who absolutely didn’t deserve to get in. They can be telling you lies when they probably paid someone to do it for them, or they just have a ton of money and connections,” Howery says.

The college olympics are a knowingly biased system in which students tend to find themselves falling for. Watching college acceptance videos, comparing accomplishments, and so much more is a recipe for disaster.

Sacrificing years worth of life for an Ivy League, in the end, may not bring true happiness. But taking the time to experience and explore genuine ambitions will.

Leave a Comment
About the Contributor
Joy Ren, Editor-in-Chief