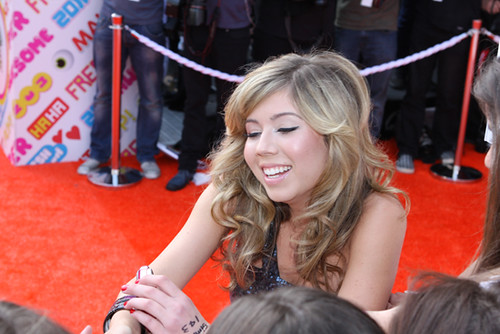 Former actor Jennette McCurdy was commonly found at Nickelodeon-themed events during her time on iCarly, including the famous Nickelodeon Kids’ Choice Awards.

Many of today’s high school and college students grew up watching iCarly, Victorious, and Sam and Cat.  Many of us find ourselves rewatching old episodes for some nostalgia. I still remember my excitement when they became available on Netflix.

In 2021, iCarly came back to its audience once more as a reboot. Cast members such as Miranda Cosgrove (Carly Shay) and Nathan Kress (Freddie Benson) found themselves acting in their familiar positions again. However, one fan-favorite actor was missing. Actor Jennette McCurdy, famous for her role as Sam Puckett in iCarly and Sam and Cat, recently published her memoir, “I’m Glad My Mom Died,” which illustrated the unspoken trauma she experienced while acting and to further explain why she is uninterested in continuing her acting career.

According to the novel, McCurdy initially began acting because of her mother. McCurdy’s mother, Debra, homeschooled McCurdy along with her three brothers. As a breast cancer patient, Debra believed that McCurdy could find success as a child actor if she worked hard enough for it. However, Debra’s definition of such success was found by breaking down the walls of McCurdy’s privacy by forcing her to practice and audition for a multitude of roles in Hollywood. Her weight was closely monitored, along with the types of food she ate. Simple tasks such as using the restroom or taking a shower were also done around Debra.

At auditions, Debra would force McCurdy to drink cans of Red Bull before an audition in order to have more energy. Whenever Debra could not sit in with her for an audition or could not obtain free parking, she used her breast cancer as an excuse. At home, McCurdy could not escape her stress. Despite seeing the issues of her exploitation, her grandparents remained in the background and continued to try and support the family. For example, McCurdy mentioned that she slept on mats along with her brothers instead of getting proper beds despite making enough money to buy some. McCurdy barely saw her father around the house; when she did, it typically caused a fight between her parents. Because money was tight around her home, McCurdy felt guilty if she would not rehearse and win as many auditions as she could to improve her conditions at home. She became a “people-pleaser,” especially so that she could make Debra happy.

After many successful auditions and experiences, McCurdy found herself on the spot of iCarly. She became close friends with Miranda Cosgrove but still struggled under the stern supervision of Debra. During her casting, McCurdy faced a lot of challenges due to her lack of adolescent education and her undiscovered eating disorder. In many cases, the directors would force her to eat on screen in order to fit in with her character’s love of fried chicken, which only triggered McCurdy’s issues even more. Despite these concerns, Debra continued to push McCurdy to comply with the directors’ wishes, even if it made her uncomfortable.

These experiences left readers stunned at how much McCurdy managed to hide, but to her, it was more than just describing her specific experiences. The memoir accurately describes much of the abuse that child actors go through, whether from their family, the industry, or both. Even though they are in what most people consider the “happiest” and most “care-free” stages of their lives, they are stuck memorizing lines and trying to act them out.

What made this memoir interesting to me were the interviews that came right after the novel was released. In her interviews, McCurdy discussed how many of her fellow cast members were very supportive of her decision to quit acting. She remains in close contact with Cosgrove, who she hopes will enjoy the book. While every experience in the acting industry is different, McCurdy hopes this will shine a light on how the acting industry can change someone, whether for the better or worse.

I highly encourage students to take a look at this book. This review only touches on some of the snippets of her memoir, along with some of the child acting experiences she had gone through. This book is an easy read in terms of format, as the chapters are very short and the text is not too complex to understand.

With that being said, the content of the novel is very heavy content-wise in order to help illustrate the pressure that McCurdy has faced. All in all, this is a must read.

Leave a Comment
About the Contributor
Angel Gupta, Staff Writer

Angel is a current senior at Wilton High School. Much of her writing consists of reviews of books and music as well as the occasional article on health and well-being. In her free time, she plays the guitar or sleeps in.