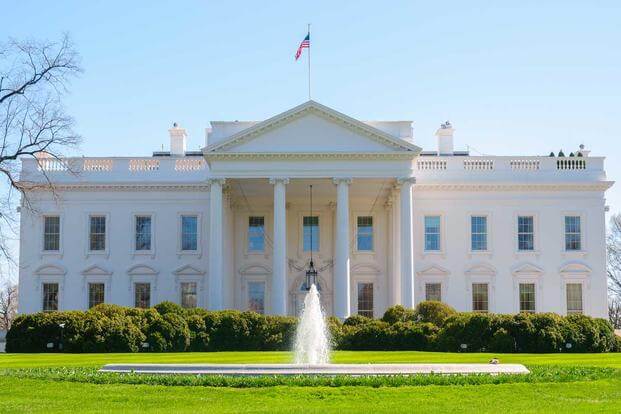 Many new government employees are now working in and around the White House as a result of America’s new presidency. (Jim Absher)

Many new government employees are now working in and around the White House as a result of America’s new presidency.

Three Biden employees change the country for the better

As 2021 and a new presidency begins, the majority of America hopes for change, healing, unity, and reconciliation. As part of the new Biden-Harris administration, a record number of government officials from broader, more diverse backgrounds now have input in our country’s most important decisions.

As the highest-ranking African-American government official and one of the youngest senior advisors ever to be employed by a U.S. president, 31-year-old Symone D. Sanders is one of many forging a new path of diversity and acceptance in the White House.

Diversity in the Biden-Harris Administration by Grace DiBuono-Krafick

“It is rural communities, it is urban communities, African-American and Latino communities, Native American communities who are [sic] being hit hardest by this virus. And so in a Biden-Harris administration, that vaccination distribution plan will be one that doesn’t just lean on these outside commercial companies, but really puts together a plan centered in the federal government on how to reach the folks that need it most,” Sanders explained in an interview with CBSNews.

As a young Black female in a field commonly dominated by older white males, Sanders has experienced her fair share of discrimination. Specifically, Sanders was told to “shut up” in an interview with Republican Mr. Kenneth T. Cuccinelli II, a former attorney general of Virginia and immigration official in the Trump administration.

Sanders also addresses the incident in her personal memoir “No, You Shut Up,” in which she speaks about the discrimination American minorities face.

Instead of becoming defeated by the many setbacks she’s faced, Sanders uses her defeats to develop ideas about how to improve. Her differences are nothing to be ashamed of; there’s a positive side to every perceived negative, at least for Sanders.

“I am optimistic, and maybe it’s because I’m one of those millennials that feels like we can change the world, because I absolutely believe that we can,” Sanders said in her personal biography.

United States Representative, Deb Haaland’s story is the definition of the American dream.

Growing up in a military family, Haaland’s family moved all across the country, resulting in her attending 13 different public schools during her K-12 educational career. Further, as a single mother, Haaland often had to rely on food stamps and lived paycheck-to-paycheck in order to care for her young daughter. On top of this burden, she fulfilled her dream of attending college and earned degrees from the University of New Mexico as well as the University of New Mexico Law School. After college, she made her name known in her community by starting and running her own small business, which produced and canned salsa, a staple of her New Mexican community as well as her Jemez Pueblo heritage.

As an enrolled member of the Pueblo of Laguna Tribe, Haaland soon became the first Chairwoman elected to the Laguna Development Corporation Board of Directors, where she oversaw the business operations of the second largest tribal gaming enterprise in New Mexico. She became a pioneer of earth-friendly business practices and used her position to assure that the environment’s health was valued in all business operations.

She is also a formal Tribe administrator and administered a local service provider for adults with developmental disabilities. In 2014, after running for New Mexico Lieutenant Governor, Haaland became the first Native American woman to be elected to lead a State Party. She used this position to assure that the often-forgotten political voice of Native American Tribes and communities was heard.

Starting in 2016, Haaland has served as an Honorary Commander of Kirtland Air Force Base. In 2018, Haaland along with Sharice Davids of Kansas became the first two Native American women to be elected to Congress. Most recently, Congresswoman Haaland was selected by President Joe Biden to be the first Native American Cabinet Secretary as well as head of the Interior Department.

In this decision, President Biden made it clear that America must reconcile with the Native American population as well as with the environment. Climate change has had a detrimental effect on Indigenous peoples, but Representative Haaland is ready to change that.

“A voice like mine has never been a Cabinet secretary or at the head of the Department of Interior. I’ll be fierce for all of us, our planet, and all of our protected land,” said Haaland.

Representative Haaland is also making a point to end the spread of COVID-19, a disease which impacts Native Americans at a disproportionately high rate, by assuring that vaccines can be effectively distributed to the Native American community.

“We have the opportunity to correct a history of deceit by the federal government against Native American people: Tribes need robust education on the vaccine to increase confidence, resources to make up for gaps that have existed for generations, and flexibility to develop their own distribution plans. We must be steadfast in making sure every community has access to the vaccine,” Haaland said.

Haaland also supports the humane treatment of immigrants and is a firm believer in the benefits immigration and immigrants have on the United States.

“As a Native American woman, my family has experienced the violence of government-enforced family separation. I will always fight to keep families together,” Haaland says.

She expressed her support for the LGBTQ community, which has recently had a large impact on the government and its proceedings.

“I believe very strongly that our LGBTQ community across this country should never suffer discrimination when it comes to finding a job, when it comes to finding safe housing, and I want to make sure that the LGBTQ community is free from discrimination so they can find success,” Haaland said in a statement in which she expressed her support for the Equality Act.

Rachel Levine was recently nominated for the role of United States Assistant Secretary of Health by President Joe Biden. While it’s inspiring that a woman has been nominated for this high government position, it’s important to recognize that Levine is also transgender.

Because she is Jewish, Levine grew up attending Hebrew School, and she recalls that her Rabbi didn’t speak of LGBTQ issues. This left her confused about her true gender identity. Levine later went on to earn her Bachelor’s Degree at Harvard College and attended the Tulane University School of Medicine. She also completed a residency in pediatrics and fellowship in adolescent medicine at the Mount Sinai Medical Center in Manhattan, New York.

After transitioning genders in 2011, Levine was nominated by Pennsylvania Governor, Tom Wolf, in 2015 to serve as Pennsylvania’s Physician General. She held this position from 2015 to 2017, during which she signed an order allowing law enforcement officials to carry the anti-overdose medication naloxone, which is credited with saving almost 1,000 lives.

While she’s faced insensitive remarks and her pronouns have accidentally been misused, Levine notes that “with very few exceptions, my being transgender is not an issue.”

If Levine is approved to be America’s new Assistant Secretary of Health, she will be the highest-ranking transgender government official in the United States.

While Levine is “proud of … the work [she] has done personally to raise awareness about LGBTQ equity issues,” she has made it clear that her first priority is to protect the health and safety of the American people.

“I’m not here to be a celebrity. I’m here to be a physician and a Secretary of Health and protect the public health,” Levine said in a statement.

President Biden also recognizes the positive effect Levine’s Federal employment will have on the LGBTQ community, but notes that her leadership skills and medical expertise are the true reasons why she was nominated for her pending position.

“Dr. Rachel Levine will bring the steady leadership and essential expertise we need to get people through this pandemic – no matter their zip code, race, religion, sexual orientation, gender identity, or disability – and meet the public health needs of our country in this critical moment and beyond,” Biden said. “She is a historic and deeply qualified choice to help lead our administration’s health efforts.”

Biden’s transition team also noted that Levine would serve all Americans, a slogan commonly used by Biden, and that Levine was previously approved three times by Pennsylvania’s Republican-controlled state Senate to serve as secretary of health and the state’s physician general.

“President Biden said throughout his campaign that his administration would represent America,” said Mara Keisling, the executive director of the National Center for Transgender Equality on President Biden’s decision to nominate Levine for the United State’s assistant health secretary. “Today, he made clear that transgender people are an important part of our country.”

America is a diverse country consisting of many minorities, women, and people of the LGBTQ community. With a new president and White House staff, the entirety of America is more accurately represented in its government. Decisions made by our leaders will be made to include and benefit all Americans, serving to unite our undoubtedly divided nation.

Leave a Comment
About the Contributor
Grace DiBuono-Krafick, Staff Writer

Grace DiBuono-Krafick is a junior at Wilton High School. As a Staff Writer for The Forum, her favorite topics to write about are current events, local news, and sports. Besides being an avid writer, she plays softball and volleyball. She also participates in many other clubs at Wilton High School, including Amnesty International and Key Club. Outside of school, she loves spending time outdoors and with friends and family.