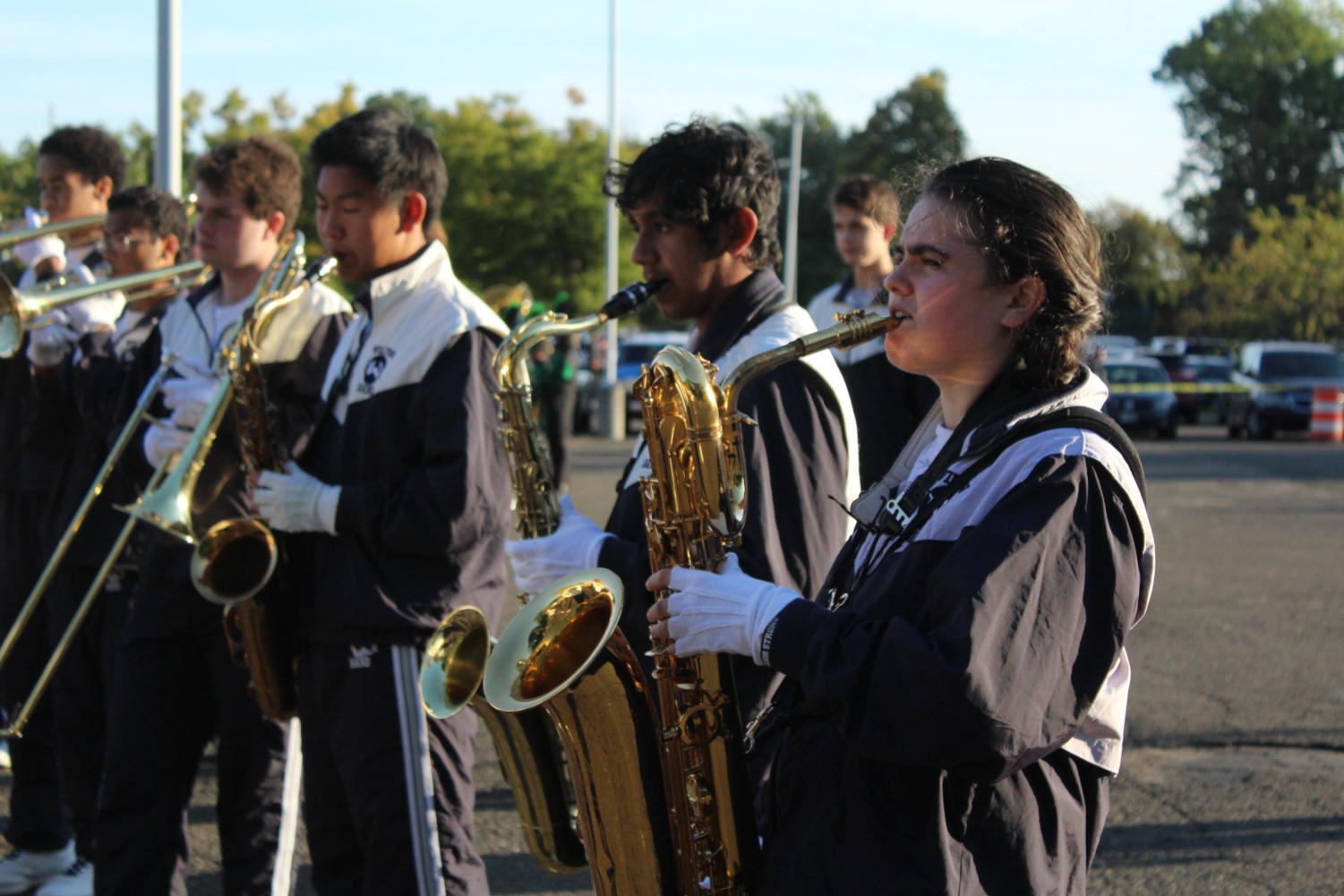 Breathe in, breathe out.

One step at a time. Not too fast. Not too slow.

A stampede of students carrying silver-keyed clarinets, brass colored saxophones, and wide-rimmed tubas cross the football field, focusing on matching the rhythm of their steps and music to the drum majors on the other end.

They can’t mess up now. After all, this is not only their first marching competition; this is Wilton High School’s. For the first time in history, Wilton students are able to compete against other high schools in Connecticut. Getting exposure to the world of music outside of the school’s campus is all thanks to the passionate direction of the band teacher, Mr. Williams.

Williams, who last year took on lead conductor of Wilton High School’s marching band, has new ideas in store for his students now that COVID restrictions have loosened. This includes not just competing, but also introducing new techniques to improve the quality of the band’s overall performance.

For starters, Williams mentions that rather than just having the Concert Band, the first “level” of band the school offers, sit and play, they can now learn how to play while standing or moving.

“It’s a whole other ballgame… it’s a whole new world for them,” Williams said. “You have to now memorize your music, and then we have to have all 93 musicians move exactly the same. They have to be coordinated on the same foot and time.”

One foot out of place could mess up the set’s visual score. From the judges’ box, every little detail is factored into the visual effect and performance evaluation. Circling the performers, like orbiting satellites, are more judges, grading the band for ensemble music, individual music, and music effect scores.

While this is already challenging, Williams expresses the added difficulty of technically having “two freshmen band classes,” as COVID prevented marching band from happening last year. As a result, the band has struggled to remain organized and unified.

“More than 50% of the band is brand new… they’ve never done marching band before at all,” Williams said.

But Williams is unfazed. He knows what he’s doing and has complete confidence in his ensemble, using his band-heavy and local background as experience to propel his band forward.

He initially found interest in band in fifth grade, where he learned to play the saxophone. Three years later, he decided to play the drums, instigating his love for percussion to this day.

“I got a full ride out of eighth grade to Fairfield Prep,” Williams said, explaining that after seeing how bad the music program was there, decided against going. “Central High School, at the time, had come to my school to perform for us.”

I saw the marching band, and I was like, I want to do that.”

Despite his parents’ initial frustration at his decision to attend Central High School in Bridgeport, Connecticut, Williams expresses that his lack of regret. Marching there was “the best four years of my life,” and he explains that if he never went, he doesn’t think he would have chosen to major in music at the University of Bridgeport, and thus, even have his job today.

He now applies the very same ideas and techniques he learned, such that his band is family and everyone needs to be tight-knit, to lead Wilton students towards success.

For example, Williams lets his students have some of the “conducting” power in the band, other than just himself.

“We have student Drum Majors who are leading the band, so it’s all student-led,” Williams said. “If the students buy-in to what’s going on, they want to do it more.”

In order to instill even more motivation and interest, Williams explains that he tries to make strong connections with all of his students.

“I try to get them to take my passion, and spread it out to everyone,” Williams said. “I’m hoping that everytime we have a performance, they’re just like ‘I love it’ and ‘I want to do more.’”

In addition, the actual format and structure of the band is evolving. In the years prior, before Williams took over, the band was show style, consisting of more dancing and high steps — knees coming up to the chest. The drills were also not as complex, as students practiced in small groups and only had to remain coordinated in squads of four.

“I got rid of that,” Williams said. “We are now going more ‘core style’… in a more competitive realm. Our drill is more military based.”

Williams has also worked hard to enhance the experience of percussionists in the band. As a drummer himself, who currently plays in the ‘Saint’s Brigade’—a traveling band based in New York—he explains how percussionists usually have to sit in the back of the class and wait for everyone else to finish playing.

“I gave them their own class so I could focus on them, with their curriculum and rudiments; I think it has made all of our ensembles better,” Williams said.

Mr. Williams is working to get his students to the level other schools are currently at, in hopes of creating more even competition. Another goal, he expresses, is to get new uniforms for the band; real band uniforms, not just tracksuits.

Now, the band must continue to prepare for upcoming competitions, the largest one being at Metlife Stadium on November 6th, where 47 bands are already signed up to compete.

Williams has confidence though, as already, despite the band’s inexperience, their first performance (September 25th in New Milford) won them an “Excellent” score. This is just one ranking under “Superior”, which is the highest possible level.

Not to mention, the band’s performance this year consists of four Bruno Mars’ songs, with their theme thus titled “Life on Mars.”

If this isn’t enough to show how Wilton High School’s marching band, under the new leadership of Mr. Williams, is “out of this world,” then nothing can.

Joy Ren is a junior at Wilton High School and a Managing Editor for The Forum. She runs track and field and cross country, plays clarinet in her local youth orchestra, and advocates for menstrual equity. She loves to write a variety of pieces ranging from opinions to features.