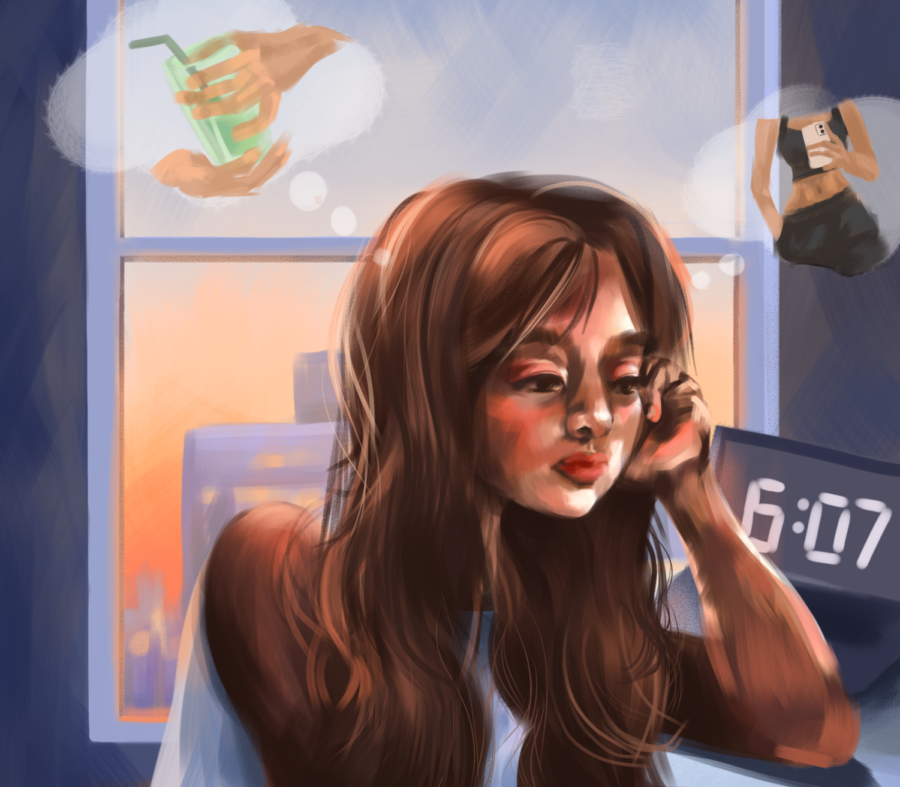 The "that girl" trend has taken a large effect on girls and young people overall.

That Girl and Other Trends
The idea of “that girl” has spread rapid-fire around social media platforms, much like other popular diet and lifestyle trends. But what if trends like this sparked the worldwide epidemic among teens obsessed with perfection?

Disguised on the internet as “movements created to influence females to be the best versions of themselves,” trends like “that girl” display short video clips — of which- socio-economically and appearance-privileged females usually star by engaging in a random set of activities deemed by Instagram as “healthy” and pleading others to follow suit.

Some of these arbitrary formalities include: waking up at the crack of dawn, immediately chugging copious amounts of lemon water, doing an hour-long fasted cardio-based workout before partaking in fresh fruit, avocado toast, and celery juice (all of which were bought from the same luxury local farmer’s market just moments prior). They often title these montages: “How I glowed up,” “Becoming Healthy,” or “Finding Balance”.

Other trends also perpetuate fad diets, aiming them towards the young adult population who regularly browse on platforms and whose algorithms only feed the insecurities they face. The ramifications of these messages — or fallacies if you will — have proven catastrophic in the past decade, with eating disorders reaching record highs and nearly zero vacant hospital beds in treatment facilities.

Experts Explain: What’s the Issue
Reshaping reality, a new club introduced just this year into the Wilton High School repertoire, focuses on addressing the issues surrounding social media and its effect on body image as well as the frightening increase in disordered eating associated with these media platforms. Co-president of the club, Vivian Eckert, finds the club of utter importance.

“Social media has overall created this specific construct of a ‘beauty standard’ for genders which is unrealistic. Images and videos of celebrities, models, influencers, and even peers are posted all throughout social media platforms––whether that is TikTok, Instagram, Snapchat, etc.––and they lead many teenagers to think to themselves ‘So that is what I’m supposed to look like?’” Eckert said.

Eckert referred to a phenomenon that begins with a “spark” in the mind of the victim to social media’s pull.

“This ‘spark’ has the ability to influence the actions of that specific individual, which could cause them to want to start counting calories, gaining negative eating habits, and aiming for different clothing sizes,” Eckert said.

The problem with the body standard created on social media, though, is that few can safely or naturally attain it-every person’s “set point” or healthy body size differs. Well-being has no look, so even people that appear healthy in the eyes of modern society may struggle with insecurities or negative habits as well. In fact, many of the individuals perpetuating trends struggle themselves, and promote unhealthy lifestyles, despite the praise they receive for their “willpower” or “discipline”.

The coveted byproducts self-proclaimed by the dieting industry, such as motivation, discipline, and appearance-based results often share one expense: true well-being. Jolene Massad, co-president of Reshaping reality, mentioned that disordered eating is a main root of many of these issues.

“Harmful trends are usually ones where people encourage eating less or eating food that isn’t nutritionally valuable. We see this a lot on TikTok specifically like the “it girl” trend where dinner is just a salad and breakfast is juice,” Massad said.

The Consequences
Without proper dietary licenses or verifiable sources of information, many of the people advocating for such trends know little to nothing about nutrition or the implications of their information. Young people in particular are lead to then gain a false truth within a world of screaming media promising “fast results” and “dream bodies”.

Studies have indicated a direct link between the pandemic and eating disorders. Lisa Damour, New York Times journalist and psychologist, cited that The National Eating Disorders Association helpline experienced a 40 percent jump in overall call volume since March 2020. Among callers who shared their age over the last year, 35 percent were 13 to 17 years old, up from 30 percent in the year before the pandemic.

Scientists credit this rise to the influx of social media and technology exposure during the pandemic, where internet services jumped up 40% as opposed to pre-2020 according to the National Institute of Health. Many teens turned to social media to find solace in the difficult times, but instead emerged from them with life-threatening illnesses, insecurities, body image struggles, and an overall feeling of inadequacy.

How Can We Conquer This?
The noise of the media can be hard to drown out, especially when the world relies on it so much. Nina Rutherford, Vice President of Reshaping Reality, remarked that during her visit to the school, guest speaker Reane Regehr’s shared come incredibly resonating words.

“You have a limited amount of energy every day and I think placing it somewhere like how your body looks is not a way to protect that energy,” Regehr said.

Along with Regehr’s words, Ella Dempster, along with other club members, decided to take matters into their own hands and start making change on the small scale.

“We added positive notes to the mirrors after school, hopefully inspiring some confidence,” Dempster said.

In addition, she says that talking about the issue and erasing the stigma will help to reverse the damage done, and hopefully initiate prevention from an early age, claiming that speaking about “normalizing” this stage of insecurity that comes with adolescence will “inspire confidence” throughout the community.

These signs and reminders located throughout the school restrooms encourage students to view themselves as more than their appearance, inspiring them to communicate with each other and reach out when in need or struggling with body image.

While the feat to eliminate misinformation on the internet will require years of work and prove nearly impossible, trying to advocate for conversation, care, and sensitivity marks a necessary step for the time being, while the world reconciles the mental ramifications of the pandemic, the age of technology, and the trends that have generated unhealthy habits. “That Girl” has more than meets the eye: more dangerous layers underneath her that the public must exploit, reinvent, and redefine. No one should feel pressure to amount to an unattainable standard. Health involves more than caloric intake, appearance, or frequency of exercise. One can characterize a healthy individual as a balanced individual: someone concerned with satiating themselves socially, intellectually, spiritually, and physically. The first step to a truly healthy world is reconsidering what health means: a fluid condition subject to all the normal ebbs and flows of life, not balance and perfection at the expense of contentment.