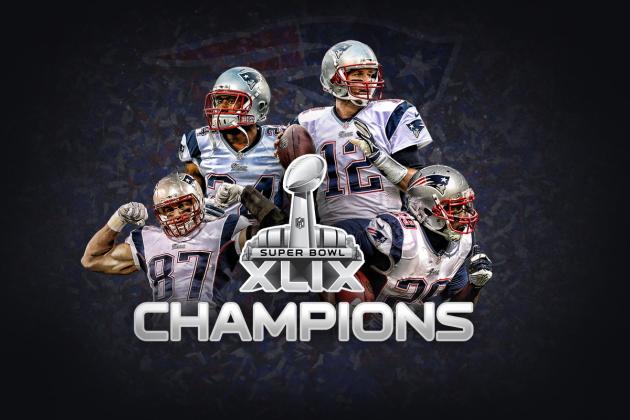 On Super Bowl Sunday, over 110 million people tuned into Glendale, Arizona to watch the New England Patriots and Seattle Seahawks battle for the NFL championship title. Between the Puppy Bowl, the classic Budweiser and Doritos commercials, and Idina Menzel’s performance of the National Anthem, fans were hyped up before the game even began, with their pigs-­in-­a-­blanket and chili ready to go. After clashing on the field for over sixty turbulent and unpredictable minutes, the Patriots came out victorious with a final score of 28­24.

During the first quarter, the two teams juggled back and forth, their unrelenting defenses keeping the score at 0­0. The first touchdown of the night came during the second quarter from the Patriots, with wide receiver Brandon LaFell, completing an 11­yard pass from quarterback Tom Brady. The Seahawks quickly retaliated and running back Marshawn Lynch ran the ball 3 yards for the touchdown. Still struggling to secure a lead, the Patriots’ tight end Rob Gronkowski caught a 22­-yard pass from Brady for another touchdown. In a desperate effort, Seattle’s wide receiver Chris Matthews snatched an 11­yard pass from quarterback Russell Wilson, pushing a touchdown during the last 30 seconds of the heated second quarter. Therefore, it was a tied game, 14­-14, heading into Katy Perry’s halftime show.

The Seahawks dominated during the third quarter with unbridled energy and intensity, as Steven Hauscka scored a field goal and wide receiver Doug Baldwin completed a 3 yard touchdown pass from Russell Wilson. Heading into the fourth quarter, the Seahawks possessed the momentum with a score of 24-­14.

Naturally, the Seahawks fought back, proving their immense will to win. With about a minute left in the game, wide-out Jermaine Kearse made a miraculous, juggling catch on the ground at the 5­yard line. The number one running back in the NFL, Marshawn Lynch, then hustled the ball to one-­yard line on first down.

With the pressure on and both teams chomping at the bit, Seahawks coach Pete Carroll made an inexplicable, ill­-timed, risky, and absurd play­ call… Russell Wilson threw the ball.

Out of nowhere came the Patriots rookie cornerback Malcolm Butler, leaping in front of Ricardo Lockette and miraculously intercepting the ball with 20 seconds left of the game. This last­-ditch effort ultimately sealed the outcome of the game, inscribing the Brady­-Belichick duo in history as four­-time Super Bowl champions.

Butler, previously a Popeye’s cashier, was the last person anyone would have expected to make the game­-saving play, which added to the heart-­pounding anticipation and excitement of this year’s Super Bowl.

A roller coaster of emotions, Super Bowl XLIX was characterized by the collision of two opposing forces: Seattle’s smoldering defense versus New England’s steely offense. The outcome of this legendary game will forever be memorialized by Tom Brady and Richard Sherman’s simultaneous sideline­ reactions: Brady jumping up and down with childlike glee and Sherman crumpling and mouthing, “WHAT?!?” America’s reactions exactly..